Plain grey concrete is drab and has little if any aesthetic appeal. There are numerous techniques now available to enhance the appearance of a poured concrete slab as shown in Figure 1. Some of these processes can be used on any concrete slab that has been freshly poured while others can be used on slabs that have been in place for a substantial amount of time such as around pools, patios, walkways, and driveways.

It should be noted that with the possible exception of the exposed aggregate technique, all other decorative concrete techniques rely on a solid finished surface. If you have areas of concrete that are flaking, these areas should be repaired prior to adding the decorative finishes.

Stamped concrete, as shown in Figure 2, uses a negative template

, usually made of urethane, steel or fiberglass to place a pattern into wet concrete. The templates produce a variety of shapes, forms, and textures and are designed to have the appearance of tile, wood, flagstone, brick, pavers, and stone. A vast array of decorative colors

, specifically made to blend with concrete are available. The colors are either mixed into the concrete before it is poured or dusted on the surface on site.

The technique of stamping concrete provides it with the ability to not only blend with other architectural features but to enhance the overall landscaping project. Complex designs can be etched into the concrete giving any property a unique appearance.

By using engraving, you can produce elaborate patterns, such as pavers or brick at a fraction of the cost of the actual material. Once the concrete is engraved it can be stained which adds “look alike” coloring to the finished project. The visual and decorative possibilities are only constrained by your imagination.

An excellent and very eye appealing finishing technique for driveways, patios and walkways, is created by exposing the aggregate embedded in the concrete mix (Figure 4).

The best results for the exposed aggregate technique are usually obtained when the colorful aggregates are blended into the ready-mix concrete at origin. However, experienced contractors can add the aggregate to be exposed in the concrete at the time of pouring. In either case, there are three different methods of exposing the aggregate within the concrete: sandblasting, chemical treatment or by water pressure.

The amount of the aggregate to be made visible is controlled by the amount of sandblasting or water used to expose the material. The exposure can be light or heavy depending on the desired visual effect. A single concrete slab can have light areas and heavy areas, creating unique textured patterns.

It is generally accepted practice to seal, with a clear coat acrylic, the areas where the aggregate has been exposed and by doing so you enhance the colors of the aggregate.

Adding a color to the concrete when it is produced at the plant or by applying it to the wet concrete after it has been poured is a technique often used to enhance existing colors around the property, such as stone, stucco and roof materials.

Only use color enhancements that have been formulated to work with concrete. 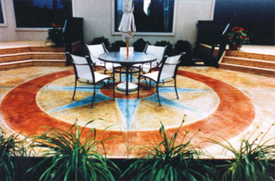 With the use of a concrete saw or hand tool it is relatively easy to create intricate patterns in the concrete. It is common to stain the concrete with different shades of coloring to create a flagstone, as shown in Figure 5, or other enhanced visual effect.

This is an excellent method of hiding the cracks in the surface of a concrete slab.

Unlike coloring, where the dye is added to the concrete in its wet state, either at the initial production of the product or on-site, stain is used to color concrete that has already cured and is hard, as shown in Figure 6.

Only use stains that have been formulated to work on concrete. Always clean all dirt and grime off the concrete to be stained before application.